Four Morning Glory blooms greet me as I step out on my balcony. My little garden of pots and planters delights me in a myriad of ways: sunflowers growing by leaps and bounds, at least six inches every two weeks; the radishes, suddenly plump and spicy, when not even a month ago they were mere seed specs; the California poppies, blooming nonstop since I brought them home in April, are more diminutive now, and remind me of old people, shrinking with age, yet still beautiful. 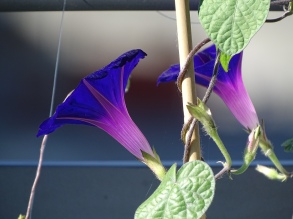 But it’s the Morning Glories clamouring for attention today. They have something to tell me, something I need reminding of, something worth pondering,

I count their blooms – three in a pot I planted with masses of African Daisies and miniature petunias; one more hiding among sunflower stalks in the big planter at the east end of the balcony. I almost missed this bloom, noticing it only when I stood over the pot, contemplating the vines twirling upwards from it, twined around a length of bamboo.

Where the vines curl around the bamboo stake, they are sturdy and strong. But where the stakes end, the vines keep going, stretching skyward, looking frail and weak.

They need something to support them, I think to myself and I head inside to rustle through the drawer where I know I’ll find a box of fishing line, purchased to catch flowers instead of fish.

Ten minutes later, I’m twisting the line around the balcony railing, and tucking tendrils of vine into its loops. They don’t want to be contained and keep slipping out, so I Ieave them be. The line is close enough that I know they vines will eventually find their own way into it’s curl. And be stronger for it

I don’t know how they know to do this, to edge themselves towards some supporting structure – a sunflower stem, a length of bamboo, a balcony rail. But that they do gives me pause for thought.

I also need supporting structures in my life.

A few weeks ago, I woke before dawn with a piercing pain in the left side of my chest, felt it pulsating into my shoulder. I didn’t think it was a heart attack, but it was bad enough that I knew I needed to go to the hospital. At the end of all the tests, the prognosis was that I most likely had pulled a muscle. An anticlimactic, but most welcome, diagnosis.

“It sucks to be sick when you are single and live alone,” my friend Mike said to me later in the week when he heard what had happened.

When people in my life discovered my need, their response was immediate. My friend Rebekah recruited her mom, Sue, to take me to the hospital then went off to pick up two work colleagues who I was supposed to meet at 7 a.m. My sister-in-law, Glynis, about to board a plane for Florida, cancelled her flight and asked to be escorted out of airport security so she could join me at the hospital. My neighbour, Kristi, who missed my early morning text because she was the gym, offered anything I needed and apologized for not being available immediately.

Although, to be honest, when I first woke in pain that morning, my initial thought was not to ask anyone to take me to the hospital. Instead, I planned to call a cab, thinking I could take care of myself, that I didn’t need support. My initial text to Rebekah was to ask her to take care of my work colleagues, not me.

But my friends – my support structure – were having none of that. Lean on us, they insisted.

“Thank you,” the Morning Glories whisper to me as I twine their fragile vines around fishing line. “Thank you for noticing we need support.”