“Landscape. I’d like to see more of the landscape,” I said to my generous hosts when they kindly asked what else I would like to see while I was visiting The Yukon recently. I could visit museums, wander around Whitehorse, sit by the mighty Yukon River that runs through their land. 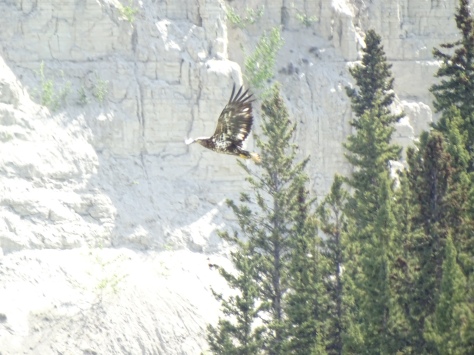 I would have been happy for option #3, and had in fact sat beside the river for an hour or so the previous day, watching eagles, sparrows and ravens fly effortlessly from one bank to the other. I wandered the river bank, sat in chairs roughed out of splintery wood, and kept a can of bear spray tucked close by my side. “You won’t have to use it,” my friend said as he handed it to me. “But if you do, make sure the wind is not blowing in your direction.”

The bears kept to themselves and I lived to see another day. And what I really wanted to do on that day was see more of the Yukon landscape. My friends had already driven me south on the Alaskan Highway to the small village of Carcross where we’d bought excellent coffee (and I purchased a lovely print with an even lovelier story, but that’s for another post).

This time, they decided to take me north, just 45 minutes to another great coffee shop, Bean North, which seems like it’s in the middle of nowhere, but people have been making their way there for 20 years, so I guess it’s actually somewhere important.

I surprised myself slightly by my request to explore landscape. But of all the things I could have done in Whitehorse on my last full day, I knew none would satisfy me as much as a ramble through the land, stopping now and then so to capture photos of turquoise lakes, bald mountains, tiny roadside lupines and tall, slender black spruce.

In other places, at other times, I would have been satisfied with a day of browsing in galleries or tucking into a quaint pub for a mug of cider. But something about the land, the air, the light of the Yukon called to me. I wanted to be in it, on it, surrounded by it.

There are two reasons for this. The Yukon is spectacular, wild and dramatic. It’s also a little untidy. I say this with the utmost respect and because of my second reason for being so drawn to this northern territory. It reminds me of Newfoundland and Labrador.

And Newfoundland and Labrador is the landscape of my soul. It pulls at my heart like no other place. It, too, is untidy and unruly with its scraggly balsam fir, bald mountains, twisty rivers and serpentine lakes. 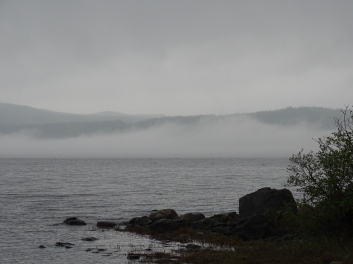 I have come back to Newfoundland for a 10-week stretch, to live on the lake that filled my childhood and teenage summers, and has been a constant every year since, even though I now live thousands of miles away, in the much tidier, much more organized province of Ontario.

I have been given a sabbatical from my working life, a gift of time in order to complete a writing project. It occupies my mind, this project, and I am grateful for uninterrupted space in which to think and to write and to set a story down in words and sentences and paragraphs and pages.

Many of the world’s best writers were harried, troubled souls out of whom tumbled majestic, profound and complicated stories. I used to envy their madness, their ability to scribble masterpieces in dim attic nooks high above congested city streets.

I am not that kind of writer. I prefer quiet, early mornings, a window that looks out on creation, not things created. I am most content when my soul is settled.

And it is settled here on the shores of this lake surrounded by balsam fir, white birch and the maples my dad planted nearly 20 years ago. The shore is rocky and rough; alders grow in great swaths, even though we cut them down every year. The lake is deep and too cold for swimming this early in June. But on the morning I arrived, two loons swam close to the shore. Last week, my neighbours watched a caribou and its calf swim across the cove. I keep scanning the lake, hoping more will come.

The weather is unpredictable. This morning I awoke at 6:30 a.m. and discovered the day was still tucked under blanket of fog. Unable to make up her mind about waking up, the day squinted open one gleaming eye, then closed it again. She threw off her cover of fog then gathered it up around her again. And again. And again.

Eventually the sun came out stripping the fog away to reveal a great sheath of blue sky. I sat with my morning coffee on the kitchen veranda for an hour or more. 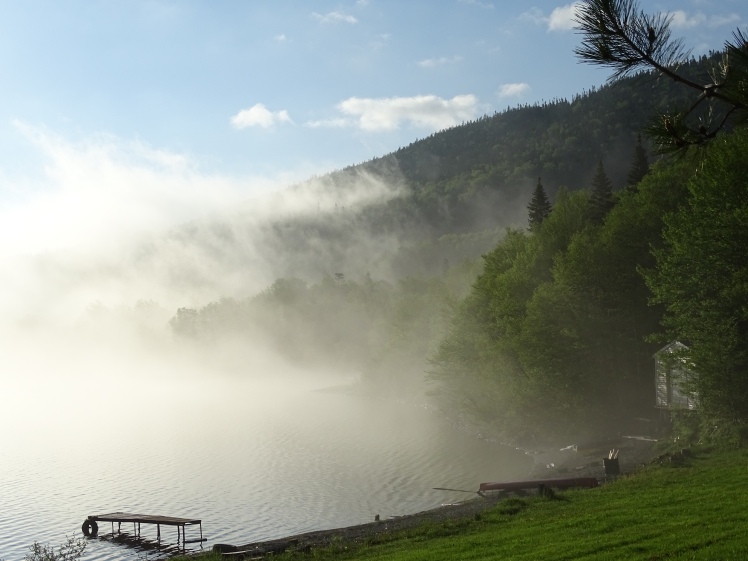 Then the wind came up and the rain began to fall. Like the landscape, the weather in this place is unpredictable, untidy and unruly. Just the way I like it.

10 thoughts on “Untidy, unruly, this is the landscape of my soul”