Ashur bought the biggest bouquet in the flower shop. Long-stem red roses, white carnations – it was spectacular. “That’s the one,” he said to me. “That’s the one I want to buy.”

A few minutes earlier, as I waited for Ashur to arrive I’d also bought a bouquet, a more diminutive spray of Gerber Daisies. Pretty and welcoming. A bouquet to say I’m glad to meet you.

But Ashur’s roses? They said something much deeper, expressing an emotion in Ashur I am only beginning to understand, and perhaps never will entirely.

I met Ashur a couple of years ago in the small grocery store across the street from my condo.

“You have a nice smile,” he said to me one day as he rang in my purchases.

“And so do you,” I replied, as genuine in my reply as he had been in his remark.

And so began our unlikely friendship. Ashur is a 21-one-year old immigrant from western Syria who had arrived in Toronto with his family not long before I met him in the convenience store. He longs to return to the place of his birth, to the place he really considers home. But the root lines have been severed. He cannot so easily find his way back to Syria, so demolished by war and in so much chaos.

I am a 54-year-old Canadian-born woman, also relatively new to Toronto. It’s much easier for me to follow my root lines back to Newfoundland, the place that is truly home for me. But I choose to be in this city. Ashur has no such choice, not that he’s ever complained about that to me.

Our friendship had always been relegated to the grocery store. But recently, that changed. 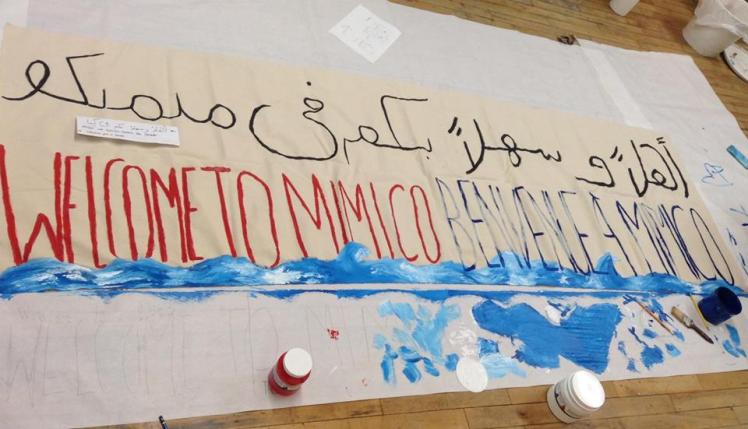 Yesterday, Ashur and I went together to meet a new Syrian family who arrived in Toronto just 10 days ago by way of Jordan where they have lived for several years. Like Ashur they cannot return to the place that is truly home for them. There are no easy root lines to follow back to Damascus, the city where they held good jobs, owned a house, raised a family.

For the past six or seven months, I’ve been part of the Mimico Refugee Respone host group preparing to welcome this Syrian family to Mimico in western Toronto. Whenever I’d see Ashur I’d update him on the progress. “Let me know when they arrive,” he would say to me. “I want to meet them.”

Ashur is a helpful, kind young man. Once, when I ordered big platters of cheese and meat from the grocery store for a party in my condo he insisted on carrying them across the street, into the building and all the way up to 26th floor.  I offered a tip but he waved it away. His gesture was from his heart, more to do with friendship than customer service.

And so, I was not surprised when Ashur chose the extravagant bouquet of roses to bring as a welcome gift to the new Syrian family. “It’s the way of my culture,” he said to me, as he paid the cashier in the flower shop. And it is also, I thought to myself, the way of Ashur.

Yesterday morning, before I went off to meet Ashur, I had coffee with another friend, Mike. We talked about true friendship and community, and how one finds that in a big city like Toronto.

“It’s this notion of letting everyone in,” said Mike as he endeavoured to find words to describe what could be, for all of us, the best way to live.

This morning, I came across an article written by John Ralston Saul in the Globe and Mail called Canada’s Multiculturalism: A circle edging ever outwards. It was a profound and timely read for me, helping me gather up the threads of experiences and conversations that have been part of my weekend.

I am grateful for Ashur who helped me understand his deep yearning for home and how it can be slightly satisfied, at least for a couple of hours, by meeting people who, like him, remember the way the air smells, the way the light plays on the land, the way voices sound in the markets and along the streets. There is some comfort in being with people whose hearts have also been pierced by the chaos ruining their homeland and who are trying to make sense of what it means to resettle themselves in a new country that is peaceful, but not home.

In many ways, I was an observer yesterday, listening as Ashur talked in Arabic with the new family. But in a small way, I was also a participant in a circle that really can edge ever outwards, if, as my friend Mike so wisely put it, we are willing to let everyone in.