This was back in 1990 when I was working for a small, independent business newspaper in New Brunswick. Once a week, our management team would stand around a counter in our office and discuss a chapter from the book before launching into our agenda.

We finished those meetings in record time – people are less likely to waste time when they are standing rather than lounging comfortably in chairs. But what we were learning from the book spurred us on as well. We wanted to be effective.

Which is why we were reading The Seven Habits of Highly Effective People: Restoring the Character Ethic. 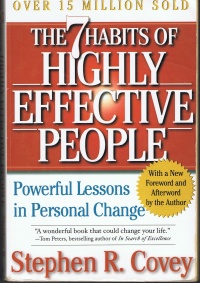 The book’s author, Stephen R. Covey, died recently at age 79. News of his death stopped me in my tracks, splitting open memories and raising questions, but also granting me a sense of satisfaction. Some lessons do become ingrained in one’s lifestyle. We really can change.

Published in 1989, Seven Habits was a remarkably successful book for Mr. Covey, launching his international fame as a business guru and time management expert. It remained on the New York Times bestseller list for five years, sold 25 million copies globally and was the first audio book to crack one million in sales.

Mr. Covey went on to write other books, including Seven Habits both for families and teenagers, neither of which I read (rather unnecessary, I thought, since I was single and well past my teenage years.).

He also published The Eighth Habit, which I never read but expresses a value I follow: Find your voice and help others find theirs.

Mr. Covey certainly followed his own eighth value when he wrote Seven Habits and set down in print commonsense advice for living a life that is successful, has perspective, and seeks the best for everyone involved.

His seven habits are as follows:

2. Begin with the end in mind

5. Seek first to understand and then to be understood

7. Sharpen the saw, or undergo frequent self renewal.

Covey’s mantra has been criticized as being simplistic but I think that’s why it works.  You can ponder each of the habits with philosophical depth – when he says ‘begin with the end in mind’ he actually means think about the end of your life and then live in the way you want to be remembered.

Or you can take the habit at face value for any task in life. Beginning with the end in mind can be applied to any project, from attacking a complex business deal to putting together a bookshelf (I usually need to remind myself to look at the finished drawing as I follow the instructions).

Some of the most helpful tips in Mr. Covey’s book come in the time management section, where he draws a simple quadrant dividing life into four squares: Urgent, Not Urgent; Important, Not important.

He says the best place to centre life is in the Not urgent/important quadrant. Do this, and there will be time for urgencies that arise.

When I was downsizing my library a few months ago, I gave away a lot of books. But I kept Seven Habits for a couple of reasons.  It was probably the first management book I read as I was just gaining traction in my career. It helped me a lot.

But I also kept it because over the years it’s been the one management book I’ve hauled off the shelf time and time again. I’m still working on the habits, and it helps to go back to Mr. Covey’s original advice to keep me on track.

You never know what life is going to put in front of you, and all the good habits in the world won’t keep you from its unexpected hurdles and sinkholes.  Stephen Covey, by all accounts a disciplined and thoughtful man, died because of complications arising from a bicycle accident.

But the fact that he was cycling at 79 says something about the way he lived his life. While he probably didn’t intend for it to end this way, I can only imagine he was following his own seven habits until the day he died.

Lynda MacGibbon is a transplanted Maritimer living in Toronto. This column was first published in the Moncton Times & Transcript. Contact her at lmacgibbon@gmail.com and follow her on Twitter @lyndamacgibbon.