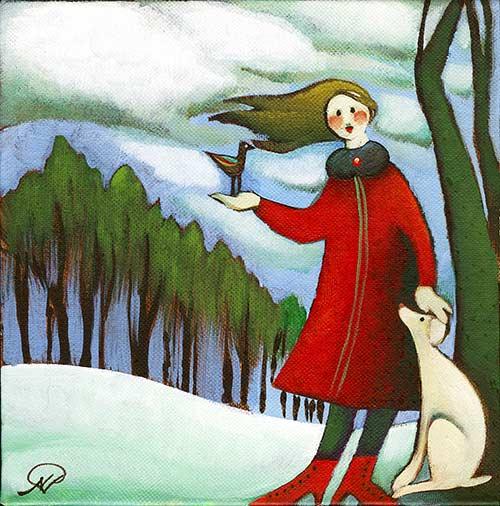 Do things happen for a reason?

For the past six years I have been part of a writers’ group that meets about once every six weeks in the dining room of my condo building. It is place of honest conversation, lots of questions, tears, laughter, applause. It always feels like a sacred space to me. We choose a word, a question or a phrase, spend the next few weeks setting down some words, then we come back together and read what we have written. Our most recent topic was “Do things happen for a reason?” These are the words I set down and read aloud to my writing friends that night.

Years ago, perhaps a 12 or 14, while browsing in the Fog Forest Gallery in Sackville, New Brunswick, a small watercolour caught my eye. I was drawn to it because it included red shoes and a pair of chubby legs, visible only up to the knees. The little girl wearing the shoes was standing at the top of a hill, looking down toward a distant village.

I loved the painting from the moment I saw it. It was whimsical and it featured red shoes. I love red shoes. The little girl had put the left shoe on her right foot, the right foot on her left – not the way she’d likely been taught, nor the way everyone else deems it proper to wear shoes. But that hadn’t stopped her from going out, from climbing a hill and stopping to look down on everything she could see from that vantage point.

I should have bought the painting. I’ve always regretted that I did not. There was something about it that resonated deeply in my heart, that connected with me, that whispered a truth. Why else would I think about that picture on and off for years, even try to search it out online? Why else would I regret not buying it?

Last June, while browsing in the Caribou Crossing Café in Carcross, Yukon, another small watercolour caught my eye. I was drawn to it because it included a pair of red boots. The girls in this picture seemed a little older. She stood in full view, wearing a red coat, a bird in her hand, a dog by her side, looking not down a hill but straight at me.

I took the painting off its hook and turned towards my friends who had taken me to Carcross that day. They were engaged in a conversation with someone I did not know but who was a friend of theirs. Moving into their circle, I waited for a pause in the conversation and then said to my friends: “I think I ought to buy this painting. It reminds me of another one I once saw in a gallery in Sackville, and have regretted not buying ever since.”

“Sackville?” asked the man I did not know. “Do you mean Sackville, New Brunswick?”

“I went to school at Mount Allison,” he replied.

“Lynda’s an east-coaster,” said my friend Barrett. “Actually, a Newfoundlander.”

And then the conversation took off at a serendipitous gallop. It turns out we’d been born and raised in the same town, although I was about 15 years ahead of him. After we’d grown up and left the Island, we’d both worked in the same small rural area of Nova Scotia. None of that was particularly surprising – East coasters tend to have two degrees of separation, not six, not just in personal relationships but in place and experience, too.

“What are you doing now?” the man asked me.

“I’m on a sabbatical,” I replied. “I’ve just come from a month on Denman Island in BC and I’m headed for Newfoundland.”

“You aren’t going to believe this,” he said, “But I once spent part of a sabbatical on Denman Island. I lived with friends who own a farm.”

A few more questions and we’d discovered we had one more place in common: we’d both spent sabbaticals on land owned by the same group of people, although we’d come at it from different connections.

I love this story. I’ve told it to lots of people, revelling in this chance encounter with a stranger who turned out to have so much in common with me. And providing me with a good story might be reason enough for me to have met a far-easterner in the far north.

Do things happen for a reason? Let me put it another way. I think there is reason, or meaning, to be found in everything. But I know that I often don’t take the time to reflect, to ponder what those reasons might be. I let the moment, the experience, the encounter pass – and I’m poorer for that.

Years ago, I saw a painting in a small gallery that caught my eye – even more than that, it caught my heart. But I didn’t buy it. I saw it, felt a connection, but kept moving past it.

This past year, I saw a painting in a small gallery that not only caught my eye, it caused me to talk about art and regret in the company of a stranger. My words were not meant for him, they were meant for my friends, but he received them, which led us to discovery of so many connections between us. By the time we left the coffee shop, we were no longer strangers.

I bought the painting. It reminds me of the one I wish I’d bought years ago, but it’s not the same, nor does it take me to the same places in my mind.

For a good part of my life, I think I was like the chubby-kneed little girl in the original painting, more likely to be standing at the top of the hill, looking down, wondering if I’d go into the village, wanting my red shoes to lead me into new conversations with anyone and everyone, curious, but not sure I had the courage to go there.

Now, I think I’m more like the older girl in her red boots and coat, bird in her hand, dog by her side, looking out at the world, more likely to engage in conversations with anyone and everyone, still curious, and now, more courageous.

This blog grew out of a newspaper column. I miss the smell of ink when my writing is published, but writers must get words out somehow…and so I blog. I am also writing a book, Crossing Thresholds: Trading Fear for Love, one neighbour at a Time (to be published by IVP in 2021) View all posts by Lynda MacGibbon

8 thoughts on “Do things happen for a reason?”

This site uses Akismet to reduce spam. Learn how your comment data is processed.